Increases to National Insurance rates for Employees, Employers, Self Employed and Directors

You are likely to have heard about the Prime Minister’s announcement on 7th September. We have long since wondered where the ‘hit’ was going to be in terms of recovering some of the money spent over the last year. It was perhaps no surprise to anyone, given the unexpected costs of supporting the economy during the last eighteen months. However, the way they have chosen to do it does break the manifesto promise not to raise core taxes, which has raised a few eyebrows.

The positioning of this new tax is interesting. They wanted to avoid ‘income tax’ (perhaps that was too much aligned to their ‘core taxes’ pledge?) and perhaps this is a less obvious way to raise funds? The way they’ve presented it too is slightly misleading. Saying it’s a 1.25% increase is misleading. In actual fact, the increase for employees for example is from 12% to 13.25%, so the increase is 1.25% percentage points, not 1.25% of the total already being paid, and it doesn’t take an accountant to tell you that that is nearer 10% of the contribution that has been increased not 1.25% of the original figure everyone’s been paying. What’s more, it’s been touted as a way to stem the post Covid health and social care crisis. Not a way of shoring up the coffers after the massive furlough payments and grants, which is interesting. Perhaps they thought that was more palatable to the general public?

However, ours is not to reason why, our job is to share with you what it will mean in practice, as far as we can glean.

What we are presented with is a 1.25% levy for health and social care on earned income for both employees, self employed and employers and the same additional increase on dividend rates. These increases will take effect from next April 2022.

The increased National Insurance contribution levy is on the NI paid by both employer and employee and is expected to raise £36bn for health and social care over the next three years.

The increases relate to Class 1 as well as Class 4 for Self employed contributions. It does not affect Class 2 or 3.

“The increase will apply to:

The increase will not apply if you are over the State Pension age.”

The table below details the current Class 1 and Class 4 NIC rates and how these will change from 2022 based on the new health and social care levy: 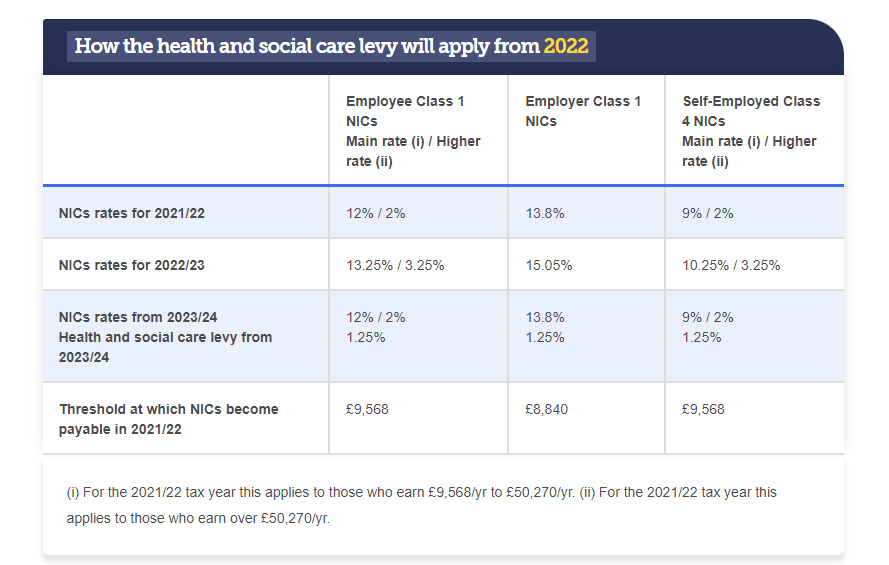 CARE COSTS AND CAPS FOR CONTRIBUTION

The PM talked about the care homes situation and paying for accommodation to sweeten the announcement and announced a ‘cap’ on the amount someone would be expected to pay during their lifetime (but this doesn’t include accommodation so the plot thickens) Currently there is no such cap or limit. Currently, anyone with assets worth more than £23,250 has to fund their care in full.

This means that people starting care from October 2023 would not pay more than £86,000 over their lifetime (not including accommodation) and those with assets of less than £20,000 will not make any contribution.

We are told the extra tax will be affecting most those who earn the highest. And ‘affluent business owners who pay themselves with dividends’ will also be affected. With an increase of 1.25% on the current rates on all earnings via dividends over £2,000.

Ironically, those people were penalised during the last eighteen months, as any furlough support was for PAYE income and not dividend income. So it seems that yet again, Directors will be hit.

The PM said that anyone earning less than £9,568 would not have to pay the extra levy, while the top earning 14% will be paying around half of the expected revenue. However, he claimed that 40% of all businesses won’t have to contribute. He said the levy is not payable by those employing people under the age of 21, nor apprentices up to the age of 25 “nor on people who are going to be employed in new freeports”. (We will find out more on that for you as it emerges).

What does this mean for employees?

A typical higher rate taxpayer earning £67,100 will contribute an additional £715 a year. 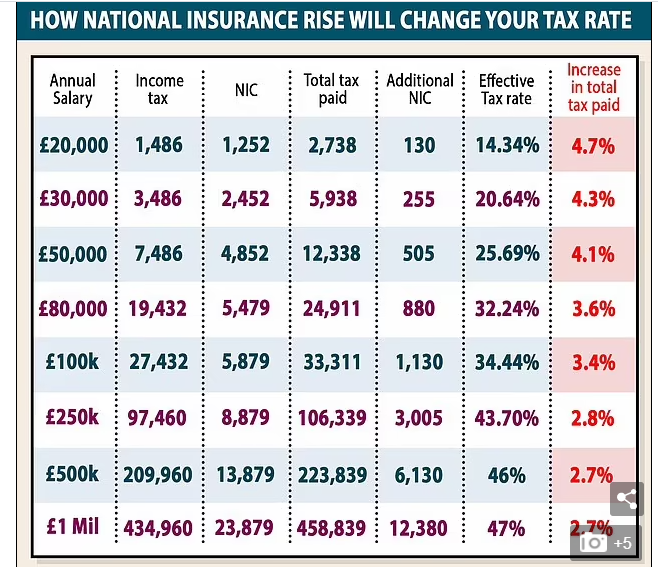 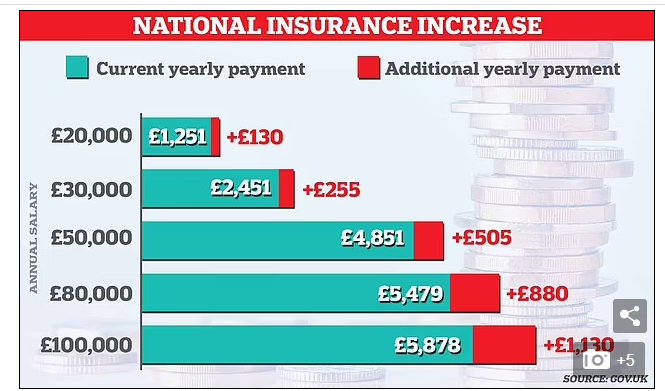 As ever, don’t be a stranger. We love hearing from you. If you’ve got any questions and want to talk about this, or any of your accounting questions or queries, just give us a call on 0176 257882 or email David (if you’re feeling shy) on David@theaccountancypractice.com

Read our latest article
We use cookies to ensure that we give you the best experience on our website. If you continue to use this site we will assume that you are happy with it.Ok